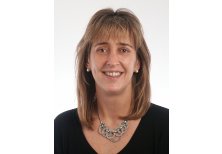 Arantzazu Burgos Fernández is Associate Professor in the department of Automatic Control and Systems Engineering at the University of the Basque Country (UPV/EHU). She graduated in IT from Deusto University in 1991, after which she finished her master´s degree in Robotics and Automation in 1992, her specialist course in Industrial IT in 1992, and her PhD in Telecommunication Engineering at the University of the Basque Country in 1997. She began working as a researcher in a Technological Centre, working on various projects related to CAD/CAM/CAE systems and control systems for flexible manufacturing systems. Between 1992 and 1998 she worked at the Higher Technical Engineering School in Bilbao as coordinator of the Master´s degree in Advanced manufacturing Technologies. Since 1992, she has worked as a researcher on various projects related to communications, industrial automation systems, Software engineering, and Bioelectronics, some of which are in collaboration with companies based in the Basque Country. She became a member of the GCIS in 2006.